Activities undertaken by the Tennyson Dunes Group include animal and plant surveys, collection and propagation of locally native plant seed, revegetation, weed and feral animal control and community education through designing interpretive signs and conducting tours and presentations. The group is complemented by the West Lakes Kiwanis who construct and maintain fences, signage and the viewing platform. Both Natural Resources Adelaide and Mt Lofty Ranges and the City of Charles Sturt provide invaluable support to the group and the Tennyson Dunes.

Our work is guided by the Tennyson Dunes Biodiversity Action Plan, so that we have a coordinated approach with Natural Resources AMLR. 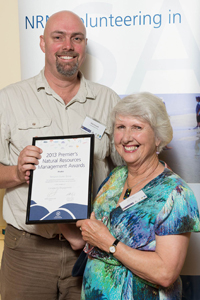 If you would like to find out more about either the group or the Tennyson Dunes themselves, please email us.

Adelaide's local Aboriginal people, the Kaurna, have recently named the Tennyson Dunes Wara Wayingga, meaning shifting sand, in recognition of the fact they are the most significant patch of pre-European coastal dunes left along the metropolitan coastline.

From modern day Brighton to the tip of the Le Fevre Peninsula, Adelaide's coastline once supported beautiful dune systems backed by wetlands teaming with life. After the second world war, urban development swamped nearly all this paradise. The Tennyson Dunes, together with only one other much smaller patch at Kingston Park, are the only dunes left, and a short section of the Patawalonga Creek on the Adelaide Airport is the only piece of wetland remaining.

Wara Wayingga, 12 kilometres north west of the CBD, is a mere 20 hectares in size, yet it has been labelled the most significant coastal dune system of any capital city in Australia.

The dunes form the only remaining refuge for many native species of plants and animals, including 16 plant species with a conservation rating such as the rare Cushion Fanflower, Scaevola crassifolia.

Yet their existence is fragile. Innumerable threats impose themselves on the Tennyson Dunes every day, from weeds and feral animals to extremely destructive human behaviour such as people leaving walkways and damaging fragile dune vegetation and soil.

These dunes are without a doubt our most precious coastal resource. The more people that learn about and respect the dunes, the greater their chance of long term survival.