Bringing Back the Butterflies

In recent years, the Tennyson Dunes Group have been restoring populations of the Coastal Bitterbush (Adriana quadripartita). This species is the only food plant for the endangered Bitterbush Blue Butterfly (Theclinesthes albocinta).

The adult butterflies pollinate the plant's flowers and also lay their eggs on its leaves. When they hatch, the caterpillars are tended by ants that carry them down into the ant nest underground during the day to protect them from birds, and bring them back up at night to feed on the plant. In return, the caterpillars give the ants a sugary waste product from eating all the plant sap. So, in effect, the ants are farming the caterpillars.

Such an amazing symbiotic relationship between three very different species is just one of the incredible stories the Tennyson Dunes has to share with us. 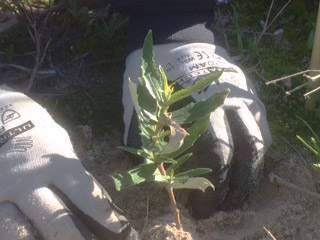 What Lives in your Dunes?

The Tennyson Dunes are one of the last strongholds for many coastal animals. The diversity of vegetation and structure of the dunes supports an array of native fauna. There are many species of birds, reptiles and countless invertebrates. Quite a few are threatened and occur nowhere else along the coast. 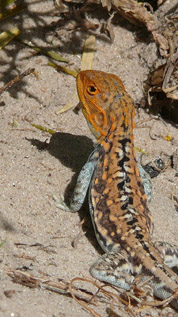 The South Australian Herpetology group have described Tennyson as extremely significant for reptile life. It is one of the few places left along the coast where the regionally threatened Painted Dragon (Ctenophorus pictus) occurs. The Painted Dragon gets its name from the brilliant blues and bright orange colour displayed by the males when breeding. If you take your time to walk slowly through the dunes, particularly during Spring, you can see them sunbaking on the pathways.

There are also many reptile species that you won't see that are hiding under the native plants they rely on. Among these is the Striated Worm Lizard (Aprasia strioloata), that likes to hide under low-lying vegetation and often exhibits a brilliant golden hue at breeding time.

Brown snakes (Pseudonaja textilis) can also be found in the dunes, but are rarely seen because they tend to avoid humans. Snakes are a vital part of dune ecology. In particular, they keep mice and rat populations in check.

At the back of the beach, Tennyson provides shelter for Hooded Plovers (Thinornis cucullatus), and Red Capped Plovers (Charadrius ruficapillus) have been seen breeding there.

In the dunes there are numerous birds of prey including the Nankeen Kestrel (Falco cenchroides) and Black-shouldered Kite (Elanus axillaris). Kestrels have even been seen nesting on the Estcourt House chimneys.

Other species including Silver Eyes (Zosterops lateralis), Willie Wagtails (Rhipidura leucophrys), Red-wattle Birds (Anthochaera carunculata)and one of the most iconic coastal bird species, the Singing Honeyeater (Lichenostomus virescens). As its name suggests, it has a distinctively melodious song. The Singing Honeyeaters are particularly reliant on the old Coastal Beard Heath (Leucopogon parviflorus) trees for nesting, food and shelter.